Tomorrow Gracie will be 22 months old, I can hardly believe it. Today we took her to get her hair trimmed and I was laughed at when I said I didn't want to cut too much off---because I didn't want her to look too much like a toddler. I know, Gracie is a toddler and becoming more and more of one every day, but she is still just my baby and in a way, regardless of how many more children we have, Gracie will always be my baby.
Anyways, the past two weeks have been filled with changes and major accomplishments for Gracie. We decided that it was time to break Gracie of sleeping in her swing---she really is getting to the point where she is getting too big for it. Those of you who really know Gracie, know that her swing has been her comfort zone. I think she really got attached to it while in the hospital, it was the only place where, no one would bother her and hurt her and given everything she had been through, we figured there could be worse things than sleeping in her swing. Well, apart from two weak moments on my part, Gracie has slept in her crib for naps and the entire night for the past two weeks. Mind you, she isn't sleeping through the night anymore, and we are hating getting up three times a night to comfort her, but, the swing should be put away soon. Yah! 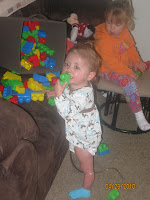 Now for the most exciting news, we switched Gracie to the blended diet and she is thriving on it!! I owe it all to Andrea for giving me the encouragement to do it and answering my questions and for sweet little Owen who restored my hope that perhaps Gracie could catch up and start making progress in her motor skills and overall development.
I'll admit that starting Gracie on this diet, I had high hopes and I'm excited to announce that some of those hopes have already been reached. Everyone who works/knows Gracie can see the difference that has taken place in Gracie in just two short weeks. Her endurance levels have increased, before she could only stand at the couch for 2-3 minutes, now she is standing at the couch for 10 minutes before she gets tired and needs to sit down!! Gracie is also jabbering up a storm and saying new words every day. A week ago Gracie started butt scooting and it is the cutest thing ever--she isn't too fast and most of the time she ends up resorting to rolling because it is faster---but it is a new form of mobility!
Gracie is finally putting weight on at the rate that her cardiologist wanted her to. I was told in December that the goal was to get Gracie to gain 1/2oz a day (that's about how much weight a newborn should be gaining) it never happened and Gracie was stuck. But just in two short weeks she has gained 8oz, 3oz the first week and a whopping 5oz the second week. Gracie is finally over 20lbs! So needless to say I am sold on the blended diet and will continue with it.
I could go on and on about all the positives we have seen in the past two weeks, but I already feel like I am rambling. I will try to post some videos of Gracie butt scooting as soon as I have time to get it on tape.
at 9:34 PM

Hurray for Gracie! I am so glad you guys are doing so well. We are thinking about you. :) What is a blended diet? You'll have to explain sometime. We need to catch up.

I am so happy for you Deanna. That other stuff is so full of sugar and ick. I mean imagine just taking a vbitamin and water and having no food.
Heart Moms need to stick together and fight against "by the book" Doctors. Mommy knows best!

That is such great news. It sounds like she is really progressing. Hurray for the blended diet. Keep up the good work Gracie!

I am SO excited to hear how great Grace is doing!!! The visible changes happen so fast and it's wonderful! If you decide to stick with it... we just got out Vitamix and I am in LOVE!! We took it on vacation and I just bought tons of fruits/veges/grains and you can throw them in whole with skins and all.. amazing!

Happy 22 months Gracie!!
So happy the new diet plan is going so well, maybe I should try it?? :)
Love you guys
xxxxoooo

She looked so great Sunday, you can very much see how much she has grown and she looks so happy! Keep it up Grace!

That is awesome!!! We are so excited to see you guys on Sunday because it has been to long!!! What an accomplishment for cute Grace!!!

Awesome!!!! I am so glad this new diet is working for Gracie. If Eden wasn't starting to eat on her own I would give it a try. I wish I had know about it prior to her transplant.
Way to go Gracie. We need to plan another playdate or girls night out again soon.

Way to Go Gracie! I haven't checked in for a while and I was excited to see all of your news!! Congrats on your baby boy and way to go Gracie making improvements with the blended foods diet!!

This is sooooo amazing!!! Congratulations! One of my other friends' babies with severe health issues at a young age was a butt scooter and it really is adorable!
I love you! My parents are in town next week, but we need to meet up again SOON!