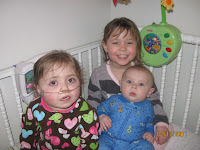 So I realize that it has been over two months since I have updated the blog and frankly that is just too long!! Though not much has happened I do feel like there is still so much to update. I thought instead of doing one huge post, I would update with three different posts, one for each child. So this post is going to be all about about our little man, Ryan. 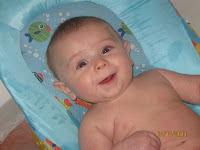 Ryan is now 5 months old and is such a sweetie. His smile and laugh just melt our hearts. He absolutely loves his jumper and though there has been several times where he has successfully rolled over from both his back and stomach he still isn't doing it consistently. Ryan can sit up on his own for about a minute before he topples over and loves playing with his sisters. 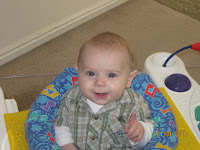 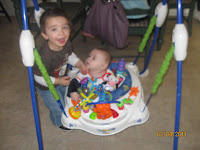 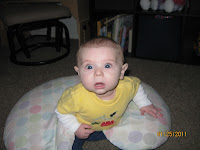 One of Ryan's favorite people is his older Morgan. Though Ryan is 5 months old the novelty has not run off for Morgan and she cannot leave him alone. Usually Morgan can make Ryan laugh at the drop of a dime, and though there are many times she freaks Ryan out by picking him up and rolling around on the floor with him he still squeals as Morgan plays with him.

Ryan loves when Gracie will come close to him and play, but this happens very rarely because Ryan is teething, hence drooling like crazy, which freaks Grace out. 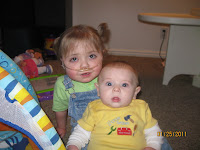 We love our little man and can't believe how fast he is growing...I wish we could just bottle him up and keep him this little.
at 9:24 PM

I'm so glad you updated! Hooray! What a cute, sweet little man!

Oh he is adorable! Glad to see an update though I can't say I have been great at updating either. Maybe you'll see some updates soon.

I am so glad that Ryan has added such a new dimension to your life and that it has been a positive one. For some reason, I'm not surprised by Morgan's affection for him. I hope that continues throughout their lives. :)

He is SOOOO handsome!

He's a total mixture of Morgan and Jason.

Sorry, Deanna. You got Gracie (and she is stinking cute!)

So where are the other 2 posts? :) He is so dang cute! I can't believe that he is 5 months already! Time sure flies. Love ya!

I think its time for another update!

Adorable! I can't believe how big your little ones are getting. It's so sweet to hear about Morgan being so sweet to Ryan and wanting to be around him so much :)

Jonathan and I are so happy to stay up to date with you all through blogs! Tell Morgan Jonathan says hello :)

Congrats on your new baby...yes, that's how long I've been totally off-grid on everyone else's lives. He's super cute.