Fun in the Snow

Since Wednesday Gracie has been sick, the problem is I don't know if she really is sick or is reacting to her new medication. After two months, insurance finally agreed to pay for Gracie's Viagra--because of how it is marketed for ED, those that need it for the reason why it was developed have to jump through so many hoops, providing complete medical histories to prove it is a necessity. Anyways, the way Gracie is behaving and the symptoms she has remind me of how she was when she came home from the hospital for the first time. She is throwing up after every feed, has diarrhea, and has a terrible wet cough. Her eyelids are red and swollen, she isn't sleeping, and she is so pale. Luckily though her sats haven't changed much, she is on more oxygen throughout the day but not much more.


I called both the pediatrician and cardiology yesterday, and was told the normal, we don't know if these are symptoms of the drug, they haven't heard of them before, but it's not impossible that they aren't. We were advised to ride it out a bit and see how she is doing mid-week. In the meantime we are giving her some over the counter drugs to help mange her symptoms so we all can sleep.


Jason stayed home with Gracie New Year's day so that I could take Morgan out and play in the snow. We went sledding and even built Morgan's first real snowman. We had so much fun, but we did wish that Caden, Morgan's cousin was still in town to play with us. We know we would have had even more fun.

I got several trips down the hill on tape, but I think this one is my favorite. I love Morgan's laugh.

This is Sam the Snowman. Morgan called grandma to see if it was ok for him to stay in her front yard and even called everyday to see how Sam was doing. Sadly Sam was knocked over by someone or something last night and is no more. 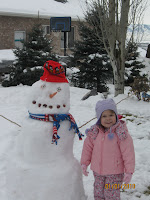 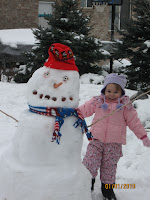 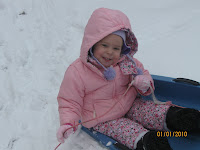 Looks like you guys had some fun in the snow. I hope Grace is feeling better soon.

Sam is awesome! Sorry he left without a word.
What fun, hope Gracie can join you next year in the snow :)
Praying for her quick recovery!

I love Morgan's little laugh too! Your babies have always been the cutest!

they are so sweet. hopefully grace will feel better soon. how fun for morgan and you to play in the snow!