California Vacation---its a long one

Jason and I feel like we have just been on a once in a life-time trip. We are so grateful and appreciative to his parents who not only accompanied us on this trip, but made the whole trip possible. Though I'm sure there were many times they asked themselves why they signed up to go with us, we loved there company and the time we spent together, despite the craziness of the trip. 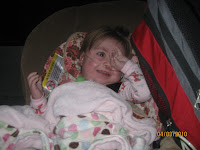 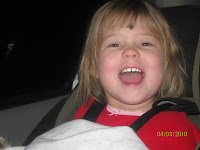 Leaving home at 5am 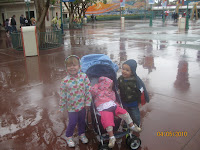 Outside the parks our 1st day. 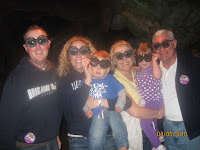 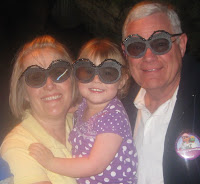 Inside of the Bug's Life auditorium.
Morgan LOVED the entire trip and has since told me that she wants to move to California. She absolutely loved being with grandma and grandpa 24/7 and loved having her Aunt Michelle and cousin Cade to play with. At Disneyland it took Morgan quite some time to catch on to how fun it could be. She wouldn't go near any characters without freaking out and she was hesitant at first to go on any rides...But she soon fell in love with the Dumbo ride and the Tea Cups, as we were leaving she proclaimed loudly and firmly, that she wasn't ready to leave the park.
Morgan's favorite part of Sea World was of course Shamu. It was so fun watching her clap her hand and shout, "Go Shamu, go Shamu!" Though dad thought that the Sesame Street show was lame, Morgan said she loved it...I'll have to form my opinion the next time we go. 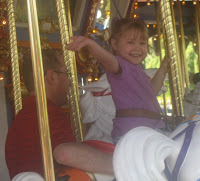 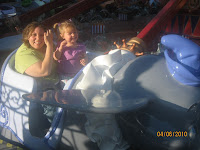 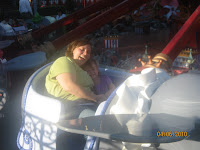 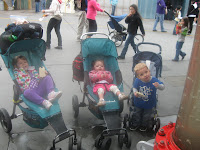 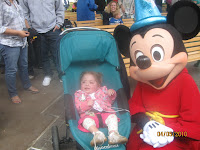 Now for Gracie...let me begin by saying she is a child that HAS to have consistency and familiarity, without it she falls apart. During the trip she was crankier than normal perhaps because we were constantly on the go and she only had a little time to just chill at the hotel or Michelle's house. Monday we went to California Adventures and apart from riding a couple of the rides in The Bug's Life area...she wasn't too impressed and actually fell asleep in the stroller (something she never does). Since Monday was supposed to be our easy/quiet day we planned to leave as soon as Gracie woke up, but during her nap we took the other kids to see Playhouse live...well we knew we had to take Gracie to it before we left...it was Mickey Mouse and the gang. We're so glad that we did take her back, she LOVED it. Gracie would dance and bounce up and down as she watched and at the end, she just kept glancing back at the stage and then at us as if to say..."what? that's it?" 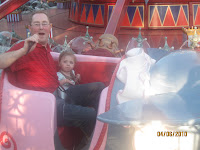 Tuesday was our big day at Disneyland and it was a crazy day. We found out later that there were about 65,000 people at the park that day. We were grateful that we had a disability access pass for Gracie...we were able to do more than we would have been able to do without it and it helped her not lose to much stamina and endurance waiting in hour long lines.
First thing on the agenda at Disneyland that day was to head to Mickey's house...though Gracie met him at California Adventures the day before...she was extremely tired and it didn't go over so well. But at Mickey's house she actually did great until Mickey tried to kiss her hand....I think if Mickey talked he would have been less intimidating. Overall we think Gracie enjoyed Disneyland and all of the rides and attractions...she loved Its a Small World, she just jabbered and waved to every doll there. During the Pirates of the Caribbean ride she kept signing all done, she wasn't a big fan of the darker rides, she even freaked out on the Winnie the Pooh ride.

Our days in San Diego were limited...I accidentally forgot the charger for Gracie's feeding pump. We tried a gavage feeding, but Gracie didn't tolerate it. After calling almost every home health agency in San Diego and the surrounding areas to see if they could help, we decided that we would need to drive back up to Rancho Cucamunga that night...So Gracie and I stayed at the hotel while the others went back to Sea World for a few more hours---I got to push 10ccs of formula into her g-tube, every 15 minutes to prevent another melt down and vomiting experience. We did get to go to Sea World in the morning and catch the Shamu show, Grace was vaguely interested, but other than that she didn't seem to like being there. I think it was too hot. We tried her on some of the rides there, but after a bad experience on the flying Elmo's, I gave up. (Let's just say that Sea World isn't very disabled friendly...the workers weren't going to let Gracie ride the ride because she couldn't walk...)
That sums up our trip in a nut shell, next time I think we will just want to spend time at Disneyland (maybe 4 days) and not be going all the time. Plus it will help that Gracie will be older than. It was a shock to her, I think Gracie had a headache from being at a lower elevation and still on as much oxygen as she is on here (her docs didn't want to tritrate based on sats, since we are trying to control the pressures), her g-tube got pulled out twice, and she isn't use to as much sun as she was exposed to during this trip (though she has a nice little tan on her legs now).
at 1:54 PM

I'm so glad you guys got to go on vacation!!! It's definetly NOT easy with oxygen tanks and feeding pumps.. but you did it!!

Sea World was aweful with Owen. He wasn't interested in the animals, it was warm and we had the same issues with rides. "He doesn't stand? He doesn't have his shoes on? You can't take oxygen on there!"


We're doing 4 days at Disneyland in October... they are much more friendly! We always stay at a resort hotel (although way expensive) so that we can ride the monarail back and forth for naps and feeds.

Is Grace still on continuous drip? I read that she didn't tolerate a fast feed. Owen still takes only 2 oz every 1/2 hour. It's so frustrating!

Read my post on blended diets. If you're feeling adventurous. He is a different boy since I got him off formula!

That looked like so much fun! We will have to go with the whole family in a few years, when the kids are bigger. I bet it would be a lot of fun!! I am trying to talk Mike into going to San Fran to visit my Grandma this summer for a few days, but I think Mike is overwhelmed at the thought of being in the car with Collin for a 12 hour trip just does not sound like his cup of tea. I just want to share the ocean with Collin before this little one comes, because it probably won't be able to happen next summer. Maybe Jason can talk Mike into it! Love the pictures and love that Gracie and Morgan had such a great time (mostly!)

It was so fun to see you guys all week long! My favorite times were watching Grace at Playhouse, and Morgan begging for more rides as we are exiting the park!

Can't wait to see you again!

way to go have an exciting adventure! You're a braver woman than I..I don't know if I'm ready to take the boys to Disneyland yet. I'm glad that Morgan loved it and that Grace had her moments-that makes it better.

So glad you guys got a fun trip! So happy the kids got to meet Mickey! I agree you are much braver than I am, but you are a tough women so no surprise there! Warm weather is on the way we will have to catch up and let the girlies play outside!