I can't believe that my baby is already 2 1/2 months old.  Wow has the time gone by fast.  I kept wanting to sit down and post, but with four little ones, it is hard to find the time.  Spencer is asleep in dad's arms watching the BYU/Boise game so instead of working out tonight, I thought I would try to update. 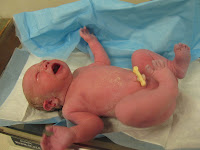 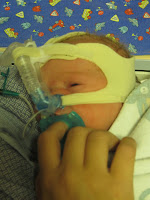 Spencer was born via c-section at 39 weeks on July 3rd.  He weighed 8lbs 6oz and was 20 inches long.  Unfortunately his lungs were having a hard time working on room air, so he went up to the NICU to get some help from the c-pap machine.  He needed more than 6 hours so he was admitted into the NICU and was on cpap for about 10 hours.  After he came off he was perfectly healthy and fine, but we still had to jump through all the hoops the NICU has to get him transferred up to the Mother-baby unit with me.  I will spare the details and arguments I had to have with the NICU doctors for them to finally transfer him, but let me just say the NICU is great for sick babies, but they really need to work better with the healthy kiddos that just need a little time to adjust, instead of having them follow all the protocols of the NICU. 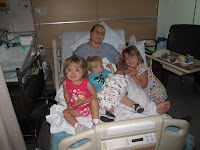 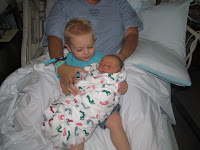 Spencer was born on a Tuesday and was transferred up to the floor with me early Thursday morning.  Jason brought the kids to the hospital that morning to meet their new brother.  Morgan, of course was in love with him.  Grace responded the way we thought and was rather indifferent.  Ryan was the one that shocked us.  He was enthralled with Spencer and couldn't leave him alone.  Even two months later, Spencer is Ryan's baby and he squeals with delight whenever Spencer looks at him and smiles.  He says, "Me!!  Meeeee!"  As if to say he is smiling at me mom. 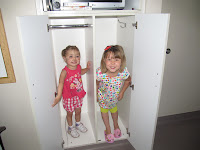 Spencer is such a wonderful baby.  So happy, easy going and adorable.  He is content just hanging out in his swing while I take care of all the craziness that is our life.  At night, once the others are in bed he is kind of demanding and wants to be held till we go to bed.  But I don't mind, I cherish it, because it won't last long! 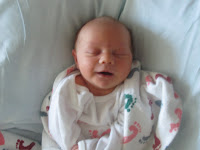 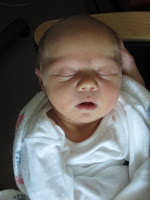 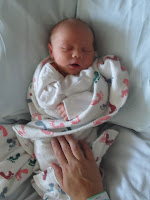 It's funny, people will ask me how old my baby is and my response is always the same.  "He's two months, but looks like he is 6 months."  Spencer is a big boy!  At his two month check he weighed 14 lbs, putting him in the 95 percentile for weight and 80th percentile for height.  I told Jay that we are good breeders, our girls are petite and our boys are linebackers! 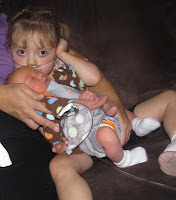 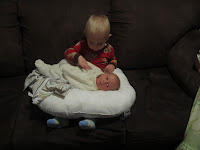 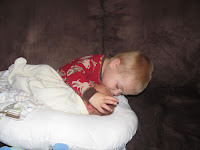 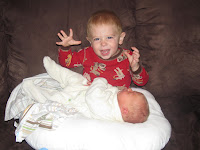 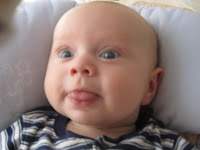 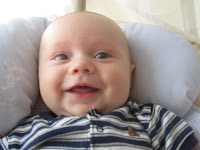 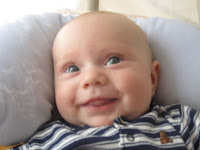 I can't imagine life without Spencer.  Its amazing how much joy and calmness he has brought to our family.
at 10:01 PM

I love this. Especially that last line. "Joy and calmness". Let's hope he can continue to provide that as he grows. :)

He is such a cutie! Congratulations Deanna! :)

Hey Deanna I am blog stocking your cute family from Michelles blog, It has grown so much since we were neighbors. Morgan is so grown up and Gracie is adoarble and you have added two very handsome boys into the mix. What an amazing family you have. Congrats! I just wanted to say hi!