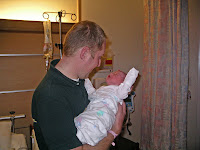 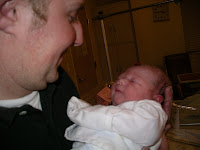 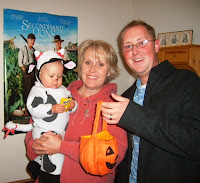 Until I was married and had Morgan, Father's Day never meant much to me. I grew up being ostracized by my father--he chose not to have anything nothing to do with me for whatever his reasons were. It wasn't until a few years after becoming a member of the Church that I began to have a relationship with a father--the Father of us all--our Heavenly Father.
I learned that Heavenly Father loves me for who I am regardless of what I may or may not do. He loves me despite my faults and shortcomings. My Father in Heaven is always there for me whether I choose to go to Him or not. He has my best interests in mind and will help me in whatever ways will allow me to become the person I am suppose to be. Obviously my words are not sufficient to describe all that Heavenly Father means to me and all that I have learned how and what a perfect Father is and interacts with their children.
I am extremely grateful that I was able to form a strong and trusting relationship with Heavenly Father before I ever got married so that I could know the traits to look for in a man who would eventually be the father of my children. Jason by no means is perfect (he'll be the first to tell you so) but as a father I couldn't ask more.
He loves Morgan with all of his heart. Though it hurts him when she refuses to sit on his lap and cuddle, he is OK with that because he wants her to be happy. When he comes home after a long hard day at work he will play with her and read to her the same book 5 times over if she asks for it. When we talk or pray for Morgan he always has her best interests in mind and wants her to have the best things in life without spoiling her too much.
I know that he loves and will do the same for Grace. His strength and wisdom in what we are facing with Grace is amazing!! And though it is hard to imagine what may happen, he knows whatever will happen will be the best thing for Grace and will be in accordance with Heavenly Father's will.
So again I am thankful for this day to remember not my own earthly father but my Heavenly Father and my wonderful husband--who is a blessing to Morgan and Grace and all the other children that we will be given. 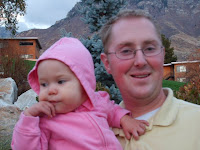 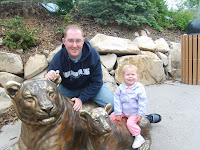 You always know how to say it best!

Jason not only is a wonderful father and husband, but an amazing brother to Mike and I. He has cheered Mike ans supported him many a time. We are grateful to know him and be his family.

That was beautiful. You are amazing. I'm so glad to catch up with you on your blog!