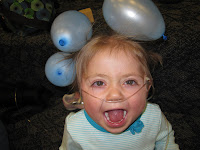 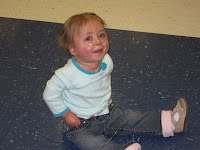 Gracie loves to ham it up for the camera!!

I've had every intention of posting an update of Gracie sooner, but the last week has been crazy. I have been sick and I have had my share of days where I have felt way too overwhelmed with everything that instead of posting a negative post, I thought I would just wait till my attitude and perception of things changed.
Now on to little Miss Gracie. I can't believe that Gracie will be 2 years old in just under a month!! It is amazing to me to see how far she has come. Today in motor skills class, she actually let me hold her under her arms and help her walk across the room---a first!!
Gracie is still working on trying to get into sitting on her own, it is just so hard for her. I'm convinced that it is because of her sternal suspension and having her pectoral muscles cut to stretch out her chest enough to close her up after that first open heart surgery--though no doctor seems to agree with me, o'well, they don't know the lasting affects of what they always choose to do, right? (Are there any other heart kiddos who have struggled with getting into sitting for so long?)
Gracie still loves to stand with assistance and will do so for about 15 minutes before she gets tired and needs to sit down. She hates to kneel and pull to stand and absolutely destests working on the stairs, she just puts her head down and pouts, then she fights as we require her to work...it is funny and sad all at once. Poor girl, I wish she didn't have to struggle so much to do what seems so easy for so many kiddos her age.
We're still doing the blended diet (for those of you who don't know what that is, instead of formula I blend real fruits, veggies, grains, and meats into a 'milkshake' then put it in her g-tube) and for the most part Gracie is tolerating it well. Though we are dealing with her puking a lot more, to me it is worth it. Most of the time the reason for the puking episode, is because I pushed the food too fast or I didn't distract her enough while I pushed it. Gracie is gaining weight like a champ, last week she weighed in at 21lbs 15 1/2 oz!!! It is amazing to see how great Gracie is responding to this diet.
Though Gracie still isn't talking much, she is mimicking us so much more and will repeat almost everything we ask her to say. She has picked up so many signs, her favorite is all done. Today she was sitting in her stroller crying, signing all done...it was so cute, everyone around her thought she was waving...nope, she was asking for help, she wanted someone to get her out. Gracie now recognizes her nose, mouth, eyes, and ears and will point to them most of the time. She loves to go through all the farm animals and make their sounds, though the only ones she knows without help are cow and duck.
Gracie has a couple of bad habits that drive us nuts. She LOVES to gag herself and thinks it is hilarious---I wouldn't worry too much about it, but each time she gags herself, her heart rate slows and if she does it too many times in a row...well you all know what can happen. Gracie has also become rather sensitive to other babies and their cries, EVERY time a baby cries she starts crying crocodile tears and won't stop. It makes the days that I watch my 7 month old twin niece and nephew extremely hard...I think she senses that there is change in the future and hence the obnoxious behavior.
Well I guess that is quite an update that perhaps isn't very cohesive...but at least it is done.
at 9:27 PM

Hey! I know you don't know me, but I have a heart baby named Marlee who will be 2 in August. Marlee did not go from laying down to sitting up until she was 14/15 months old. Our PT actually told us it was because her pec muscles were cut and were very weak, so that is VERY possible!

Yay for Gracie! I am so happy that she is packing on some pounds! I have to laugh at some things because, while Gracie is different from other kids her age, she is also very much a typical toddler! Deanna, please oh please let me know if you need some help. I am not always good at checkin in on ya, but when you are overwhelmed please know you can knock on my door! Or send Morgan to do it!!! I'm here for ya!

She sounds too much like Owen!! :) Owen could butt-scoot well before he could sit up on his own from laying. They don't have arm muscles (no crawling) and when you don't do push ups all day, you don't have any pec muscles. Owen gets up some crazy way off his side. We worked on that forever!!!

PT hasn't been super helpful for Owen.. he doesn't cooperate much. He just does things at his own timing and that works for him. He WILL walk before his 3rd birthday!!! AAAHH.. at 29 lbs .. where are my ripped arms???

Oh sooo cute. She is looking more and more like a toddler every time I see her.
I'm with you. The effects of her first surgery are sure to have an effect on her development.

Deanna, you should be so proud of Gracie! I know it is difficult to have a heart baby, but I have seen so much progress in her. She is growing leaps and bounds, but at Gracie's pace. Hang in there and know that we love you guys!