What's been going on? 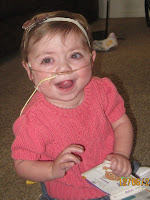 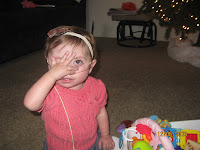 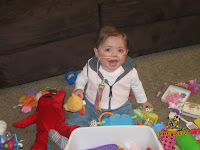 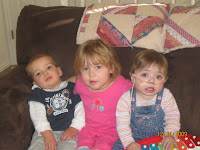 We are here and have been rather busy this last month. We have been busy with several doctor's appointments, PT visits, and trying to just keep our heads above water. With all things considered we are all doing well. Jason is super busy with the Post Office these days, its hopeful that there are still people out there who are using the US Postal Services, regardless of their bad rep.
Morgan is growing so fast! This holiday season is so fun, she has such excitement and anticipation. She has started coming up with some of the most interesting things and stories, I absolutely love it. Lately she has been talking about how she has babies in her tummy---it's because her aunt just had twins and now she wants to be just like her. Morgan actually got to go and see the twins for the first time yesterday and held both of the babies at once, Morgan literally couldn't stop smiling.
I wish I had some good pictures of Morgan, but she is at that age where she is goofy everytime we pull out the camera.
Gracie is doing really well, though we didn't get the news we had hoped for after her cath, I really think that it still helped her. It seems as if Gracie has begun to excel in areas that she hasn't before, mostly physically. At 16 months Grace is finally sitting up on her own and for the most part enjoying it. She doesn't know how to get in to the sitting position, or really out of it. When she has had enough she just starts screaming until we lay her down. Gracie is rolling all over the place and actually is doing some back scooting and tummy scooting. She isn't doing the army crawl, she is still too weak in her arms to drag her weight. I'm in the process of trying to make a device similar to a "Johnny Jumper" that puts Grace on all fours, allowing her to bounce around and allowing me to get down with her and play with her face to face while she is in that position.
We found out Gracie does not have scoliosis!!!! We also found out that her lung pressures are borderline, meaning if we don't get them lowered she will possibly not be a candidate for the third open heart surgery---fontan. But other than her pressures, from a cardiac stand point she is doing ok and now she just has to gain weight. We hope that by getting her the G-tube she will start gaining weight. Her surgery is Friday, and hopefully there will be no complications and we will be home Saturday. Since Gracie is just getting the g- tube and not a Nissen, the procedure is actually quite simple.
And as for me, I'm doing ok. I feel busy and overwhelmed, but that is nothing new. I'm grateful that I have Jason, though we are facing so many trials that cause us to wonder when will we ever get a break, having him to remind me of what really matters and how despite everything, we are loved by a Heavenly Father whose Plan is far more than just the normal day to day.
at 7:40 PM

Deanna! Thank you for the update. Gracie looks so grown up. I need to call you this week. Call me if you need to chat - anytime! We will be praying on Friday. :)

They are such cuties! The other day when I was trying to fix Grace's oxygen, she threw the biggest fit. She's right on track for tantrum-throwing!

Caden looks so tired in that picture and it reminded me that you took care of my tired, sick boy all week. Thank you!

I hope everthing goes well for you this weekend! We'll be thinking of you guys! And if all goes well, can we plan on bringing you some yummy dinner on Sunday? (unless I hear otherwise we will just plan on it if that's okay:) Hang in there, you are in our prayers!

I'm glad to hear that Grace is developing more physically. It's so funny how kids decide to progress when they want to and not when we want them too. :) She looks so grown up sitting there. I'm sorry that life is not so great lately, and you can let Jason know that I still prefer to use USPS. I hope this month looks up even more as Christmas comes closer.

we are so happy that Grace is able to sit up and no scoliosis! it's fun when they are able to roll around and get stuff for themselves. just know that you are in our prayers, and we hope all goes well on Friday.

We'll pray for you guy's on Friday. We'll be up at PCMC so maybe we'll see you there?