I'm sure many of you are familiar with Albert Einstein's quote about insanity "...doing the same thing over and over again and expecting different results," well all of Grace's doctors must be insane. :) As you all know she was started again on the analipril drug--she was given half of the normal dose, which is so small of a dose that nothing should have happened. Because it has a half life of 12 hours she was given another half of dose during the night shift, well it must of built up in her system because around 2am her sats started dropping steadily.

When I called around 5am this morning I was told that her blood pressure had begun to drop but they were giving her extra fluids to help it and they weren't concerned. We decided to go up to the hospital early and attend the Sacrament meeting there--as the Sacrament was being passed Jason's phone rang and it was the hospital, Grace's nurse was calling to tell us that we needed to get to the hospital immediately that her sats and blood pressure had dropped dramatically and they couldn't get them up. They had her on dopamine and ordered some blood--hoping that once Gracie got the extra blood she would be able to increase her pressure and sats.
When Jason and I got down to Grace's room her blood pressure had a means in the low 40s (we like the mean in the 60s) and her sats were in the low 50s (should be between 70 and 85). Her heart rate was in the 190s and climbing and she was sweating profusely. I asked to hold her, hoping that it would help her raise her sats and it did a pit but she was really uncomfortable. A couple hours later we put her back in her bed, gave her some morphine and she had received about half of the blood ordered---her sats were in between 70 and 75, blood pressure had a mean of 60s -70s and heart rate came down from as high as 210 to 175-180. It was some of the most scary hours we've had with Gracie in a while.
At one point the Attending came in and said that this child is never getting analipril again--its nice to see someone who finally broke the insanity cycle! Tomorrow I am hoping to be at the hospital for rounds so that I can hear for myself what they are planning on doing now that Grace has proven them that analipril is not for her.
When we left the hospital tonight Gracie no longer was a dusky bluish-purple color but a pinkish pale color (which is good for her). I really hope this is the last big bump in the road before Gracie comes home---please keep her in your prayers she is and always will be so fragile, all babies with heart problems are.
Here are some picutes of Gracie while Morgan visited today. Today is Grace's 2 month birthday so we decided to bring Morgan up to see her--though Grace wasn't doing well we thought we needed to let Morgan see her. It was kind of funny, normally she is so afraid of Grace and all her tubes and wires, but she was absolutely fine with them today. She really does love Gracie and I think she finally realizes that Gracie should be home with us. 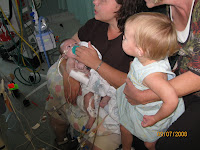 All of us intently staring at Gracie's monitor--watching her numbers. 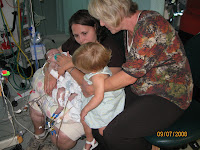 Morgan pointing out all of Grace's booboos. 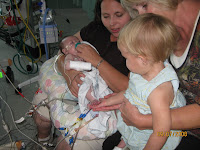 I am certain that YOU helped Grace through this trouble today. We hope that there will be some sunshine in your lives soon! With our love and prayers - Jared and Catherine Taylor

Morgan was sitting with me on the couch, I was looking at the pictures bigger, and she looked and said, "Boo-boos. Gracie." It was cute! Common sense is apparently lacking in some of Gracie's doctors. We love you guys and adore our nieces!

I love those pictures. Grace looks so content in your arms and Morgan is such a cutie. You and your family will continue to be in my prayers. Before long you will have Grace home.

She just needed Mommy it sounds like. I hope things will soon get to the point where you can bring her home. Always thinking of you.

Hi! I am Brooklyn's mom and we had the same problem with enalapril. They didn't seem to think that the medicine is what dropped her sats though. I hope everything is better now. Come visit us if you want in bed 12.
Angie